Professor Kliti Grice was announced as Scientist of the Year for 2022 at the WA Premier’s Science Awards.

From providing insights into the mass extinction events that have shaped life, developing the tools to allow further exploration of the Earth’s record of environmental change, to training more than 30 PhD students, this award honours Professor Grice’s remarkable contribution to science.

Adding further to her enduring legacy, Professor Grice is now the University’s first female researcher to take out this prestigious award. Congratulations to Professor Grice!

Field Work in Winton with Australian Age of Dinosaurs Museum

Beneath the dry soil, cattle, and sheep, the plains of outback Queensland contain a rich fossil record – ancient inland seas and floodplains host many different species that called this region home during various stages of the Mesozoic. Hosted by the Australian Age of Dinosaurs Museum in August, Prof. Kliti Grice, Dr Stephen Poropat, Lisa Smith, and Luke Brosnan joined a great crew of volunteer diggers and staff to excavate a 95-million-year-old sauropod at Belmont Station, just outside Winton. During a tour of the Museum and its collection, they also met with founder David Elliott and discussed common goals of the Museum and the WA-OIGC, especially Prof. Grice’s ARC Laureate on exceptional fossil preservation. A 100-million-year-old ichthyosaur jaw in a concretion from the Toolebuc Formation (donated by Karen Corkill) will undergo various organic geochemical analyses very soon!

Field Work in Utah and Wyoming

The wild canyons and bluffs of Utah and Wyoming hide a secret: some of the best fossils in the world, and in August, scientist Amy Elson was lucky enough to visit these ancient super-lake deposits and hunt for fossils as part of the ARC-funded extreme fossilisation Laureate within the WA-OIGC. As part of a successful trip to the Green River Formation,  she found 50-million-year-old intact fish with eyes still preserved, along with insects, plants, fossil-bearing concretions, and mammal bones. An extensive series of imaging techniques along with organic and isotopic analysis is planned for these samples, to better understand the past evolution and environments of these creatures! 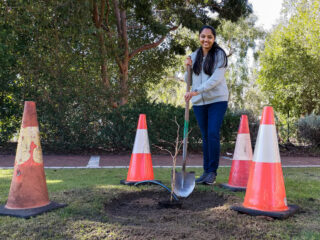 Two baby Ginkgo trees were planted on campus on the North side of building 500 at Curtin University.

The leaves from these trees are being used by Hridya Vijay in her PhD project titled ‘Microbial Fossilization of leaves’. 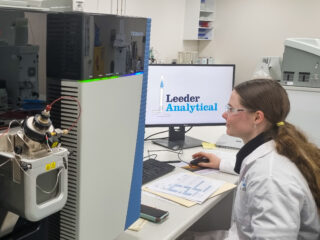 Gina Lintern is an Advanced Science Honours student who is completing an internship at Leeder consulting.

Supported by The Institute for Geoscience research, Leeder Consulting and WA-OIGC.

WA-OIGC get involved in DISCOVER

The WA-OIGC team got involved in the DISCOVER event that happened at Curtin University from the 12th-14th July by running the Fossil Farm activity for 45 high school students who were interested in STEM.

The students were also able to meet more of the team at the Innvoator’s Expo and chat with some staff and students from the group about the amazing research they are doing.