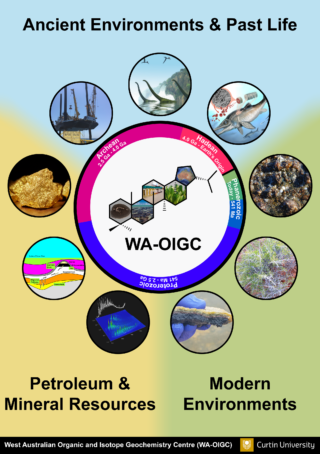 Robert Kagi (Professor of Applied Chemistry) received his PhD from UWA in 1971 and a MBA in 1977 prior to his appointment at Western Australian Institute of Technology (WAIT). Robert Alexander (Professor of Petroleum Geochemistry) was also a graduate of the University of Western Australia (BSc [Hons], DipEd, PhD). The two Bobs formed a joint venture and close partnership by applying chemistry to real problems which led to the development of the Petroleum and Environmental Organic Geochemistry (PEOG) research group, which continued when WAIT became Curtin University of Technology in 1986. In the early days of WAIT it was difficult times for financing research but it was through the combined efforts and energy of the two Bobs that they were able to implement research from profits they acquired from industry-funded projects. Gary Woodhouse was the first research scholar to work on the first mass spectrometer installed at WAIT in 1981. In 1993 the two Bobs were jointly awarded the RACI Applied Research medal. Later in 2000 Professor Robert Alexander was awarded the “Lewis G Weeks Memorial Gold Medal” in recognition of an outstanding contribution to the development of the petroleum exploration and production industry in Australia.

In 2000, the Western Australian Centre of Excellence in Mass Spectrometry (CEMS) at Curtin was launched and led by the Late Professor John de Laeter. CEMS had nodes in the Schools of Applied Chemistry, Applied Geology and Applied Physics. The Centre was a major collaborative initiative between Curtin, the University of Western Australia and the CSIRO. The development of this state-of-the-art research infrastructure through PEOG and CEMS enabled the School of Applied Chemistry to assist industry-focused research and development in Western Australia and continued to be a major force in mass spectrometry well into the next decade.

Dr Kliti Grice (from University of Bristol) who joined Curtin in 1998 took up her CEMS appointment as a post-doctoral fellow in 2000. She established the first compound specific isotope facility and group in Australia (followed by 2 ARC QEII fellowships and ARC Professorial fellowship) which led to her becoming Professor of Organic and Isotope Geochemistry in 2007 and the establishment of the Western Australian Organic & Isotope Geochemistry Centre (WA-OIGC) from PEOG. In 2018, Professor Grice was elected as a fellow of the Australian Academy of Science. In 2004, The Water Chemistry Research Unit within PEOG formed an alliance with the Water Corporation of WA and formed Curtin’s Water Quality Research Centre headed by Professor Robert Kagi and then A/Professor Anna Heitz and Cynthia Joll. In 2009 WA-OIGC moved to building 500, construction was completed on Curtin University’s $116 million Resources and Chemistry Precinct, a collaboration between academia, government and industry designed to attract world-class researchers to the facility and take research in these spheres to the next level.